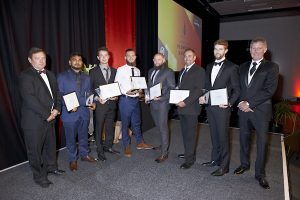 A forty-year-old apprentice has won a scholarship at the 2018 NZ Plumbing Awards. As nzherald.co.nz reports, you are never to old to retrain and get recognised for your efforts.

The hardest part about becoming a plumber was going back to school, says Tom Walls, a 40-year-old apprentice from Havelock North.

Walls was one of six throughout the country who are training with the help of the scholarship as Master Plumbers strives to maintain the skills of plumbing, drainlaying and gasfitting..

To be considered for the scholarships, candidates must have demonstrated diligence in their studies and personal growth over the past year, and be seen as true assets to the businesses providing them with the on-the-job training towards their plumbing, drainlaying and gasfitting qualifications.

Walls said he had thought about a plumbing career in the past, but had done nothing about it, until he spotted an advertisement while home in Hawke’s Bay on holiday.

“It’s not all dirty work, there’s a good variety, and the qualifications you can take worldwide,” he said.

Auckland Plumbers Group has a handful employed with us at any one time.

As Director Andrew Durrans points out “We actively promote apprenticeships in our industry. We think it is so important that knowledge is passed on and people of any age and gender see a plumbing career as an enjoyable and rewarding trade”.